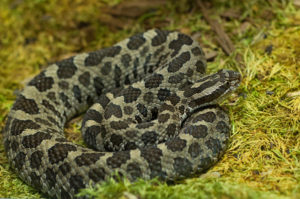 It can be difficult to distinguish a venomous snake from a harmless one. The primary misconception of snakes is that the majority of them are dangerous. Depending on where you’re located, this is typically not true.

A common myth about snakes is that just because they have a triangular shaped head, they’re automatically venomous. 99% of snakes have triangular heads. Another myth is that if a snake has a patterned scale, it’s venomous. A lot of snakes have patterns, and some venomous species don’t have a pattern. The most common snake, a Garter Snake, has a patterned scale and is harmless. In addition to these misconceptions, just because a snake rattles their tail is not an indication of danger. The sound of a snake rattling against dry leaves can seem very similar to the sound a Rattlesnake makes, which can cause some confusion.

Most venomous snakes are big and fat. Rattlesnakes have a distinct and unmistakable rattle at the end of their tale. They have gray, black, brown, olive, or yellow scales and banded, diamond, or spotted patterns are most common. Pupil size is also a common way to distinguish venomous and harmless snakes. Typically, dangerous snakes have a pupil that resembles a cat’s; an elliptical shape with peaked ends. Non-venomous snakes usually have rounded pupils. 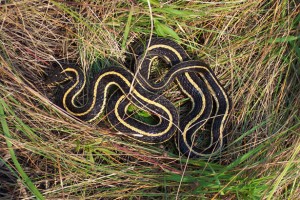 We do not recommend getting too close to any snakes, as it can be difficult to distinguish them. Spotting any breed of snake is hardly ever a welcomed sight. Leave it to the professionals!

We specialize in the humane removal of raccoons, rats, squirrels, and other pests in the New York/New Jersey area. For a complete inspection and evaluation please contact us or call us at 718-227-7227 and we will be happy to make an appointment at your convenience.